When I was in high school, I told my parents I wanted to go as far away as possible from my home for college and work. A few years later, I almost did. I moved over 8000 miles (12800 km) away from my hometown of Baton Rouge, Louisiana (USA) to India, first to Chandigarh, followed by Delhi and Bangalore (official name being Bengaluru even if most of the people still use the old name). For over four years, I explored the nonprofit and social enterprise scene, studying Punjabi, Hindi, and Kannada, and working as a teacher, program officer, and communications coordinator.

When I first arrived in India, I was pleasantly surprised by the multitude of transportation options and the ease of moving around. Uber has become incredibly mainstream, and is complemented by Ola, it’s Indian competitor, along with a brand new subway, auto-rickshaws, and buses. For travel across India, flights are incredibly affordable and efficient (sometimes as low as $15!) and trains provide a more scenic route.

Having come from a place in the U.S. which is internationally known for gun violence, one of my favorite parts of Bangalore was how safe I felt, in a place where gun violence is very rare. Additionally, the variety of international foods and the ease of getting them delivered to your doorstep, makes life so much easier. From food delivery to laundry, there is literally an app for every need. 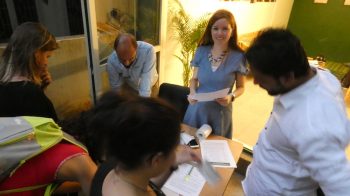 In Bangalore, there are innumerable opportunities to attend free events on topics from health to agriculture and everything in between. It’s an incredible place to learn about social innovation from people who truly walk their talks and are on the cutting edge of impacting the bottom of the pyramid. Bangalore is unique in the fact that there are very traditional non-profit charity organizations working alongside organizations which have developed some of the newest technologies in the world. Events like Villgro’s Unconvention and Amani Institute’s own Demystifying Social Impact Careers bring together hundreds of people who are creating change globally.

While working at Amani Institute in Bangalore, I took many of the Social Innovation Management Program classes with the Fellows from around the world. It was through the inner journey classes that I honed in on my own burning, or what I was truly passionate about. I became more aware of my own motivations to work in social impact and why they were important to me. After being deeply immersed in Indian culture, I also had the opportunity to learn about social change from the Fellows in places like Algeria, Brazil, and Jordan. 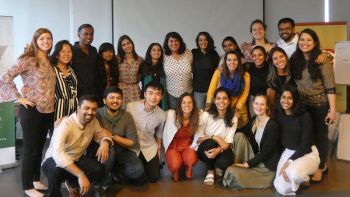 After becoming fluent in Hing-lish , an expert bargainer and even being given the Indian name, Abrinder, I realized that I needed to go back to where I came from, where many of the same social inequities existed. My home state of Louisiana has some of the poorest health outcomes in the western world. Whereas India is consistently improving in many social indicators, the U.S. is on the decline. Additionally in Louisiana, there is a severe brain drain of young college graduates leaving for jobs and not returning.


It was only after living in India and working with Amani Institute, learning from the Social Innovation Management Program, that I became keenly aware of the value of living outside of your home to reframe and better understand the issues that exist in your own backyard. For so long, many of us have been fixated on going abroad to work on “solving” development issues, but what if we left our homes to learn from others working on similar issues, only to return with so many new ideas.

When we learn about social innovation in a new environment, we’re able to return with newfound knowledge and potential solutions. We see inequality where we were blind to it before. So, why not learn in a city which is one of the world’s most innovative? I can guarantee it will also inspire you, so that when you return home you will be equipped with so many new ideas and inspired to create change.

If you are ready to take a leap, and enrich your global perspective with an insightful learning experience in an emerging market, check out Amani Institute’s Post-Graduate Certificate in Social Innovation Management. In only 6 months (2 online and 4 in Bengaluru, Nairobi o São Paulo), the program provides you the skills, the experience and the network to accelerate your career in the social impact sector.

*Abby TerHaar is working as a consultant, while sensing the health and education issues in her community. Previously, she worked as a Programs and Communications Coordinator at Amani Institute in Bangalore, India.